Zenyatta is one of the heroes in Overwatch. He is an omnic guru who wants to prove his purpose of mending the problems between humans and omnics through interpersonal connection and engagement.

Zenyatta calls upon orbs of harmony and discord to heal his teammates and weaken his opponents, all while pursuing a transcendent state of immunity to damage.

Zenyatta is an omnic monk who wanders the world in search of spiritual enlightenment. It is said that those who cross his path are never the same again.

Years ago, following the Omnic Crisis, a group of outcast omnic robots experienced what they described as a spiritual awakening. They abandoned their preprogrammed lives to establish a communal monastery deep in the Himalayas. After many years of meditation on the nature of existence, they came to the belief that they were more than artificial intelligence and, like humans, possessed the essence of a soul.

Recognizing the spiritual equality they held with humans, the monks, led by the enigmatic robot known as Tekhartha Mondatta, sought to heal the wounds caused by the Omnic Crisis a generation earlier and bring humans and robots back into societal harmony. Their message was embraced by millions around the world, and they became global celebrities.

But one monk, Zenyatta, disagreed with this new direction. He believed that the way to repair the problems between humans and omnics was not through dogmatic teaching but through interpersonal connection and engagement.

Ultimately, Zenyatta followed his own path. He chose to leave the monastery and wander the world, helping those he meets to overcome their personal struggles and find inner peace. But, when necessary, he will fight to protect the innocent, be they omnic or human.

Orb of Harmony
Ally-targeting healing projectile type
30 HP per second
90 m/s projectile speed
40 m range
Lasts 3 seconds or until target is changed
0-second cooldown
Zenyatta casts an orb over the shoulder of a targeted ally. So long as Zenyatta maintains line of sight, the orb slowly restores health to his ally. Only one ally can receive the orb's benefit at a time.
Default Key: (

Orb of Discord
Enemy-targeting debuff projectile type
-30% damage resistance
90 m/s projectile speed
40 m range
Lasts 3 seconds or until target is changed
0-second cooldown
Attaching the orb of discord to an opponent amplifies the amount of damage they receive for as long as Zenyatta maintains line of sight. Only one opponent can suffer the orb's effects at a time.
Default Key: (

Zenyatta enters a state of heightened existence for a short period of time. While transcendent, Zenyatta cannot use abilities or weapons, but is immune to damage, moves twice as fast, and automatically restores his health and that of nearby allies.

For all of Zenyatta's skins and weapons, see Zenyatta/Skins and Weapons.

One purchase of an alternate weapon skin will apply to the Orbs of Destrucion of all unlocked skins when equipping it.

Get 4 kills or assists with Zenyatta's Orb of Discord within 6 seconds in quick or competitive play.
Reward: Pixel Spray

The Iris Embraces You

Restore 1500 health with a single use of Zenyatta's Transcendence in quick or competitive play.
Reward: Cute Spray

Tekhartha Zenyatta was a member of the Shambali, a Buddhist-esque monastery in Nepal that preaches omnic rights and that omnics' possession of souls. Zenyatta came to disagree with the monastery's methods of spreading their message. He believed that humans and omnics should unite via empathy, not just dogmatic teaching. He decided to leave the monastery and now wanders the world in search of spiritual enlightenment. It is said that those who cross his path are never the same again. He believes that by forming people into relationships, the world can be healed, and a better society created. But, when necessary, he will fight to protect the innocent, be they omnic or human. The orbs he uses were hand-carved at the Shambali monastery and serve as a means to channel omnic energy.

Zenyatta became the mentor of Genji, a human that had been given a machine body to save his life when he arrived at Nepal. Genji had been unsettled by his existence, but Zenyatta helped him come to terms with his dual existence. Genji moved into the village at the Shambali monastery.

Around the time of recent Christmas, he was seen meditating next to Genji at a place which looks similar to Nepal.[1]

Zenyatta was on pilgrimage in Suravasa, intending to reflect on Mondatta's teachings, when the Vishkar Corporation's ground breaking caused a tremor that destroyed the statue of Aurora in a temple. Later, inside the temple, he met with Vishkar agent Satya Vaswani, who'd come on Vishkar's behalf. He told her that it was good that Vishkar was taking responsibility for the damage they'd caused, but it would mean nothing if the help they provided wasn't constructive. He offered her lodging at the temple so that she may better understand the community and the temple's faith. She agreed to stay, and he guided her through the temple, also informing her about Aurora's history.

Zenyatta greeted Vaswani the next morning, noting that she had put on a temple robe. She stated that while she had not come as a pilgrim, she was sincere in her efforts to provide recompense; an intention that Zenyatta had never doubted. Days passed before Zenyatta gave her the Orb of Perception, and told her to study it. On the fourth day, she watched Zenyatta and the other omnic priests prepare food for anyone in the village who was hungry. Noting the angry whispers directed at Vaswani, served her food himself, as a gesture of silent support. Later in the evening, after meditation on the orbs had finished, Zenyatta asked Vaswani to stay behind, asking her for her thoughts on the day's events. The conversation turned to her role as a hard-light architech. At the end of their conversation, Vaswani stated that she now knew what she had to do.

Zenyatta is an omnic who wears yellow pants, a red fabric and braided rope around his waist, and sandals. A set of orbs floats around his neck as both a necklace and weapon.

Zenyatta is a very calm and supportive omnic, always willing to help those in mental pain. He is very enlightened and has a wise thought for just about anything, such as how patience is the greatest weapon and that anger only defeats the one who possesses it. He also often meditates on metaphysical ideas and makes multiple references to sayings of numerous religions, mostly to Buddhism and Christianity.

Unlike most heroes, Zenyatta never trash-talks any enemies while in a match, and only speaks of how they refuse to learn whenever he defeats one. He additionally has a very dry sense of humor, for the assumed closest teaching he has to comedy is "If you wish to know someone, walk in their shoes....or hover."

Though he enjoys sharing his guidance, Zenyatta prefers his students to learn about the morals of life for themselves. 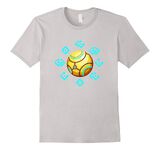 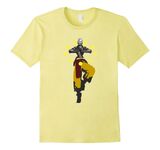 For changes made to Zenyatta's abilities, see Orb of Destruction, Orb of Harmony, Orb of Discord, and Transcendence.