Valkyrie unleashes the full power of Mercy's Valkyrie Suit, enhancing her weapons and abilities for 15 seconds. 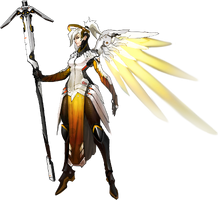 For 15 seconds, Mercy is able to fly freely, and move at an increased movement speed. The player is able to make her fly higher with the Jump button (Default:

), and fly lower with the Crouch button (Default:

). Because she has total control over her in-air movement, Angelic Descent is unable to be used while Valkyrie is active.

During the ultimate, all of Mercy's weapons and abilities become stronger: