Talon is a terrorist organization that serves as the main antagonistic faction in Overwatch's narrative.

Talon is comprised of a variety of individuals, each with their own goals and ideals. Through de facto leader Doomfist, the current manifesto is that humanity is made stronger through conflict. Consequently, Talon seeks to sow turmoil across the globe to strengthen the human race. Repeatedly, Talon has demonstrated disregard for the standard rules of engagement, attacking both military and civilian targets with impunity.

Talon was operating as early as the years following the end of the Omnic Crisis. In the time since, they have steadily grown more bold and powerful. Members of Talon are clad in black body armor, complete with helmets and face-obscuring ballistic masks. However, these soldiers appear to be mere rank-and-file grunts; Talon commands enough technological and scientific talent to create and field far more lethal operatives, such as Widowmaker.

Eight years before the present day, Overwatch was well and truly committed to stamping out Talon. Talon, for its part, wasn't going quietly, and struck against Overwatch targets across the globe. Under the orders of Antonio, one such attack was launched on Overwatch's Oslo facilities. Not long afterwards, a Talon agent infiltrated the Blackwatch facility in Rome, where a meeting was being held by Overwatch members Gerard Lacroix, Gabriel Reyes, and Jesse McCree. The agent planted a bomb in the facility, and the resulting blast leveled the structure. Reyes, McCree, and Lacroix (albiet heavily injured) survived, but many of the base's staff didn't. In response, a Blackwatch team, consisting of Reyes, McCree, Moira and Genji was sent to Antonio's manor in Venice. What happened next was classified within Overwatch, but it apparently resulted in the death of Antonio by Reyes's hand. Numerous Talon soldiers were dispatched, but the Blackwatch agents were able to fight their way out of the manor.

After Antonio's death in Venice, Talon gained a new recruit in the form of Akande Ogundimu, whose survival of the fittest philosophy aligned with Talon's. Talon saw great potential in Ogundimu, with his intelligence and ability to inspire as a commander. Ogundimu killed his mentor, Akinjide Adeyemi, and took on the moniker of Doomfist. As the new Doomfist, Ogundimu rose high in Talon and helped to orchestrate a conflict that the organization hoped would someday engulf the world. As Ogundimu rose through the ranks, Talon's leaders began to get sloppy as the organization's hierarchy was disrupted, following the rise of a new Doomfist.

Six years ago, Overwatch turned its attention to Talon's financial handler, Maximilien, knowing that he'd be likelier to negotiate. They launched an strike team operation in Havana to retrieve him in Havana, Cuba. Despite the efforts of the Talon soldiers in his convoy, Maximilien was captured by Overwatch agents: Tracer, Winston, Genji and Mercy in the Havana Sea Fort. He told Overwatch that Doomfist would be in Singapore in three weeks, and in exchange requested that Overwatch not tell Doomfist nor Talon of his betrayal. Meanwhile in Cairo, Doomfist approached unanimous Omnic, praising the mystery character for their organization's noble goals to fight for their own people, but Akande claimed these goals were doomed to fail unless their organization chose to work together with Talon. The omnic expressed interest in the offer.

The Assassination of Mondatta

In the animated short "Alive", Widowmaker was sent by Talon to eliminate Mondatta, an omnic looking for peace between humans and omnics. Despite Overwatch agent Tracer's best attempts at preventing this, Widowmaker put the bullet in Mondattas head before fleeing without a scratch.

In the animated short "Recall", days after the death of Mondatta, Reaper accompanied by Talon soldiers were sent to Watchpoint: Gibraltar to retrieve a list of all Overwatch agents. They encountered resistance from Winston, but were able to incapacitate him long enough for Reaper to gain access to the Overwatch agents database and their locations. However, Winston was able to overpower the operatives and defeat Reaper before proceeding to interrupt the hack. As a result of the failed operation, Winston initiated the Overwatch recall, bringing all former agents back onto active duty.

Vialli dispatched Reaper, Widowmaker, and Sombra to Volskaya Industries in an attempt to assassinate its CEO, Katya Volskaya, as he was tired of how intractable she was. Sombra was able to deactivate the site's security, giving Reaper and Widowmaker access to the base. Widowmaker lined up her shot, but an alarm sounded, alerting security, and sending Katya to her panic room. Widowmaker and Reaper failed to take her out, and Sombra engaged in pursuit. She reached Katya, but made her own deal, revealing that she had been the one to set off the alarm. Leaving the safe room, she reported that Katya had escaped. The operatives returned to their ship.

After the failed Russian assassination operation, Talon Leader Reaper assaulted a maximum security prison to rescue Doomfist, a member of the Talon inner council and former mastermind of a plot to sow chaos across the globe that was cut short years before by Winston, Tracer, and Genji. The relative ease of the operation led some to believe that Talon had moles within Helix Security International.[1] It would be three months before news of the incident became public. After being b Doomfist went to Monaco to meet with Maximilien to catch up with events involving the organization. Doomfist's return wasn't greeted well by Vialli, who sent his men to assassinate him in Monaco. The attempt failed, and Doomfist, Sombra, Reaper, and Widowmaker headed for Venice. The three agents eliminated Vialli's men, while Doomfist met with Vialli himself. Vialli's profit-orientated goals differed from Doomfist's Darwinian ideology, and Doomfist killed Vialli by throwing him to his death. Alongside Reaper and Maximilien, he met with what remained of Talon's inner council, declaring his intent to start a war.[2]

Talon appears to be connected closely to Blackwatch. McCree, a former member of the covert division, noted that Talon operatives were using Blackwatch tactics during an attempted raid on a hypertrain, and at least one member of the strike force appeared to recognize him, raising implications about the two organizations.[3]

At the moment, very little is known about Talon's overarching objectives or the reasoning behind their actions; however, their methods are undeniably villainous. They are exceptionally ruthless and perfectly willing to kill civilians and other noncombatants simply to cover their tracks. Recent activities suggest they may have an interest in rekindling the conflict between Omnics and humans.[4]

Gérard Lacroix was their most hated enemy for a time, the Overwatch operative heading attacks against their network. After multiple failed assassination attempts, they resorted to kidnapping and reconditioning his wife, Amélie, sending her to do what they could not. Gérard was murdered in his sleep by his brainwashed wife, and Talon's nemesis was out of the way. After the success of her mission, Talon completed the process of turning her into a living weapon. As Widowmaker, she is their most successful assassin and sniper and has had all traces of her humanity stripped away.

Overwatch later attempted to rescue hostages from Talon. Talon's aim was to extract important projects from the captured scientists. Widowmaker was deployed and killed several Overwatch agents. Captain Ana Amari, an Overwatch sniper, was able to shoot her and break the visor covering her face. Ana recognized Amélie, which gave her pause; using this opening, Widowmaker delivered a seemingly fatal shot to Ana's right eye.[5]

In the present, Reaper appears as one of the Talon's leading figures. Although the exact extent of his affiliation is unclear, he is clearly involved with their operations, given his past as the leader of Blackwatch, and has recently been seen working closely with Talon strike teams.[6][7][8] Recently, Talon also expanded their power and influence by recruiting some underworld talented individuals, like Sombra.

Several recent Talon operations have struck devastating blows to the world. There was an attempt to raid a hypertrain in the United States;[3] an attack on Watchpoint: Gibraltar in order to steal information about Overwatch's former agents;[7] and the successful assassination of Tekhartha Mondatta at King's Row.[4]

Recently, Talon's operations in Egypt was sabotaged by a vigilante "Shrike". The operation might have a connection to the Temple of Anubis, under guard by Helix Security International; and Sombra was involved in the operation. Reaper, Soldier: 76 and "Shrike" (revealed to be Ana) had a clash at Hakim's base, and resulted in the shutdown of the base.[9]

Talon also launched an assassination operation on Katya Volskaya. It was carried out by Reaper, Widowmaker and Sombra. Unbeknownst to Reaper and Widowmaker, the operation was secretly sabotaged by Sombra for her own gain.[10]

Later on, Talon infiltrated a maximum security prison owned by Helix Security International to free Doomfist. The operation was done by sending a plane with only Reaper in it to get past security and pick up Doomfist. After being freed, Doomfist went to Monaco to meet Maximilien, a fellow member of the council, in order to catch up with events involving the organization. Reaper, Widowmaker, Sombra, and Doomfist later went to a meeting in Venice to plan their next move.

An enigmatic group of supercriminals who lead Talon. There are estimated to be about 15 members on the inner council.

Various agents who act out Talon's commands without leading operations.

Talon has employed a variety of paramilitary forces. During the period of Overwatch's activities, these forces included heavily armored soldiers with specialist roles. In the present day, Talon has utilized more lightly armored soldiers, with a lack of heavy armor or armament.

During the cinematic ending of the Storm Rising event, Doomfist was speaking to an Omnic in Egypt. The community is still making theories about the Omnic's identity.

Note
† Indicates the character is deceased. 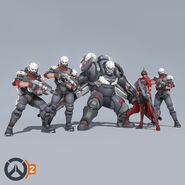