A seasonal event is a special event in Overwatch. The events last for 3 weeks (Except Year of the Dog, which lasted for 4 weeks), with the final week usually being the week of the event. During these events, normal loot boxes are replaced with seasonal event loot boxes, which contain at least one item exclusive to the event. These items include skins, emotes, victory poses, voice lines, sprays, highlight intros, and player icons. Season event loot boxes and items are unobtainable after the event concludes. Seasonal events also include an exclusive timed Arcade game mode (or Brawl, before the introduction of the Arcade). 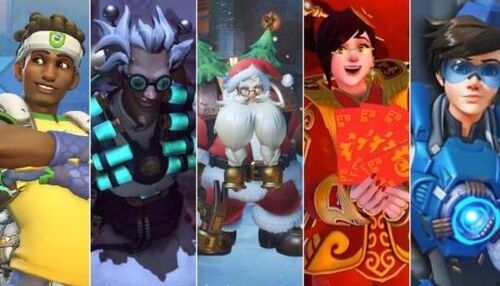 The Summer Games were the first seasonal event added, and are the fourth event of a chronological year. The loot boxes were reskinned into the Summer Games theme. The event is based on the 2016 Olympic Games and includes the Lúcioball brawl which takes place in 3 dedicated maps (Estádio das Rãs, Sydney Harbour Arena, and Busan Stadium), as well as event-exclusive sports-themed items.

Halloween Terror was the second seasonal event introduced and is the fifth event of a chronological year. As part of the Halloween-themed event, the loot boxes are replaced with jack-o'-lanterns filled with candy. The event includes the co-op PVE brawl Junkenstein's Revenge in a map called Adlersbrunn and event-exclusive items based around Halloween. The Hollywood, Eichenwalde and Château Guillard maps are also reskinned into a Halloween theme for the span of the seasonal event.

Winter Wonderland was the third seasonal event introduced and is the sixth event of a chronological year. As part of the Christmas-themed event, the loot boxes are replaced with present boxes. The event includes a new brawl, Mei's Snowball Offensive and Mei's Yeti Hunt, as well as event-exclusive items based on various Christmas/Winter references. King's Row, Hanamura, Ecopoint: Antarctica, Black Forest, and Blizzard World are reskinned into a Christmas/Winter theme for the span of the seasonal event.

Lunar New Year was the fourth seasonal event introduced and is the first seasonal event of a chronological year. As part of the Lunar New Year-event, celebrating the Chinese new year, the loot boxes are replaced with boxes of fireworks. The event includes event-exclusive items based on Lunar New Year festivities and references. The first event included a new capture-the-flag brawl mode, Capture the Rooster, which took place in a modified seasonal Lijiang Tower reskin, as well as in the map based in Thailand:Ayutthaya.

Anniversary was the sixth seasonal event introduced and is the third event of a chronological year. As part of the Anniversary event, celebrating the anniversary of Overwatch's release, the loot boxes are reskinned to match the theme. The event includes event-exclusive items themed around artistic freedom. The first Anniversary introduced the Lockout Elimination and Limited Duel arena modes with the inclusion of 3 new maps.