Oasis City Center,
Oasis Gardens,
Oasis University
Oasis is one of the maps in Overwatch. It is a Control map. It has three stages: City Center, Gardens, and University.

Oasis is one of the world's most advanced cities, a shining jewel rising from the Arabian Desert. A monument to human ingenuity and invention, researchers and academics from around the region came together to found a city dedicated to scientific progress without restraints. The city and its inhabitants are governed by the Ministries, a collection of brilliant minds who possess many secrets that have attracted the interest of powerful organizations from around the world. 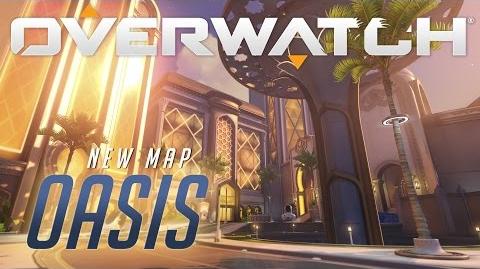 Oasis was founded by eight members of the Ministries, a collection of scientist organizations from around the world. It was designed to be an ideal technocracy, where research and innovation are unrestricted. The city has one of the most educated populations in the world.

The Ministry of Geology is responsible for much of the technology required to build the city in the Arabian desert. It is contained within a massive artificial lake and is constantly expanding. The streets are temperature controlled by mist dispersers, and crime is extremely low thanks to predictive surveillance. At the center of Oasis is a large, unfinished tower that is set to continue expanding until it is the tallest freestanding building in the world. Its exact purpose is unknown, but it is related to the city's data gathering and computational efforts.

At the base of the tower is a university with a database of all known printed material. At the north end of the city is the Abu Hassoun Gardens, an island maintained by the Ministry of Biology. At the east end is the city center, where all ministries meet and traffic is notoriously ruthless.