Numbani is a Hybrid Map location in Overwatch.

"Known as the "City of Harmony", Numbani is one of the few places where omnics and humans live as equals. This collaboration has led to the creation of one of the world's greatest and most technologically advanced cities in the short time since its establishment after the end of the Omnic Crisis. As part of this year's Unity Day festivities celebrating the city's founding, the gauntlet of the infamous Doomfist is being exhibited at the Numbani Heritage Museum."
―Overwatch Visual Source Book 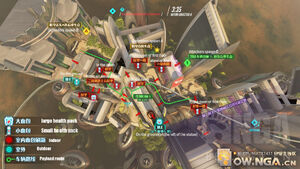 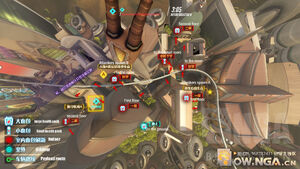 From Are You With Us? 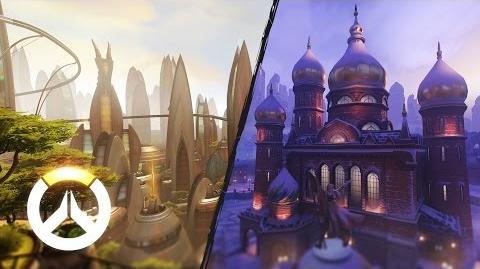 Built shortly after the Omnic Crisis, Numbani is one of few cities where omnics and humans have the same rights. The collaboration has made the city one of the world's most technologically advanced, and every year they celebrate its founding with Unity Day.

For years, the city was frequently raided by Talon member Akinjide Adeyemi. Akinjide was later killed by Akande Ogundimu, who took the title of Doomfist for a brief period but was soon defeated by an Overwatch strike team composed of Winston, Tracer, and Genji. The gauntlet was reclaimed and put into a foreign museum, but was later transferred back to Numbani after another Talon attack.

The Numbani Heritage Museum was planning to open an exhibit on all three Doomfists, but the festival was delayed due to anonymous threats.[2] The gauntlet was later reclaimed by Akande after breaking out of prison and destroying several OR15 defense bots at the Adawe International Terminal. One of the destroyed OR15s was later purchased by child prodigy Efi Oladele and upgraded into a new guardian called Orisa.