Nepal is one of the locations in Overwatch. It is a Control map. It has three stages: Village, Shrine, and Sanctum.

Years ago, a group of omnic robots experienced what they described as a spiritual awakening. They abandoned their preprogrammed lives to establish a monastery high in the Himalayas of Nepal, where like-minded omnics could gather to meditate on the nature of their existence. Led by their spiritual leader, Tekhartha Mondatta, they took over the ruins of an ancient monastery and turned it into the home of the Shambali, a place where omnics and humans alike make pilgrimages in the hopes of finding a greater truth. 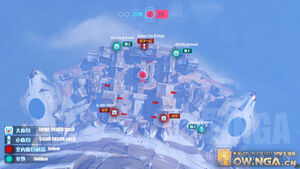 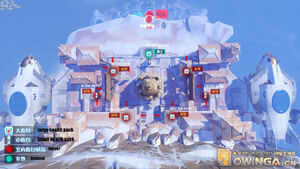 After the Omnic Crisis, a monastery was founded in the Himalayas by a group of omnics who had experienced a spiritual awakening. Under the leadership of Tekhartha Mondatta, the Shambali preached unity and equality wherever omnics were mistreated. The monastery became a popular site of pilgrimage for both omnics and humans.

One Shambali member, Tekhartha Zenyatta, left the monastery over a disagreement over how they should spread their message. His pupil, Genji, still lives in the village below.