The first event introduced Capture the Rooster, while the second introduced a competitive Capture the Flag mode and a new Capture the Flag map, Ayutthaya. The event also came with 4 special achievements and a limited series of items, which could be earned through special Loot Boxes, and unlocked through the Hero Gallery. All event-exclusive content became unobtainable once the event ended.

A special tapestry, Winston's Journey to the West, was released as a part of this event's promotion in 2017.

Capture the Rooster is an Arcade game mode exclusive to the event; it replaced the mode Capture the Flag during the event. This special Brawl takes place on one stage of a modified seasonal Lijiang Tower reskin. Both teams have a flag near their spawn room that the other team must capture. A player can pick up the other team's flag after a short capture time, and their team gains a point if it is taken to their team's flag spot. However, the flag will be dropped if the player is killed, and can be returned to its start if the other team captures it back.

There are 4 Special achievements tied to this brawl that will unlock sprays when achieved.

Capture the Dog will return during the Year of the Dog event, returning with both the normal variant and a competitive version. A few changes includes flag capture being instant, movement-enhancing and invincibility-granting abilities being disallowed by the person who takes the flag, a sudden death mode to stop ties, and a new map in Thailand.

As part of the promotion of the Year of the Rooster, Blizzard Entertainment released a set of pachimari paper lanterns. Feel free to check out what you want below and print. 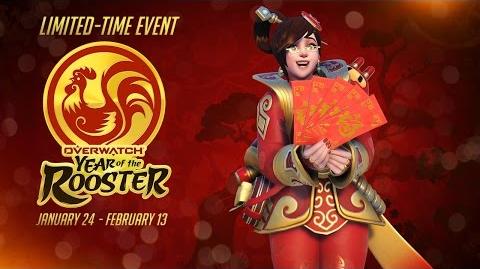