"Constructed from the remains of a destroyed omnium, Junkertown is now the home to a band of lawless scavengers known as the Junkers, led by their cutthroat Queen. When they aren’t pillaging the omnium's skeleton for anything of value, the Junkers blow off steam in the Scrapyard—a massive gladiatorial arena whose combatants fight for glory, riches...and to survive."
―Blizzard (YouTube)[1]

The payload on this map is Junkrat and Roadhog's collection of treasure and bombs. The attacking team must escort it to the queen's throne. 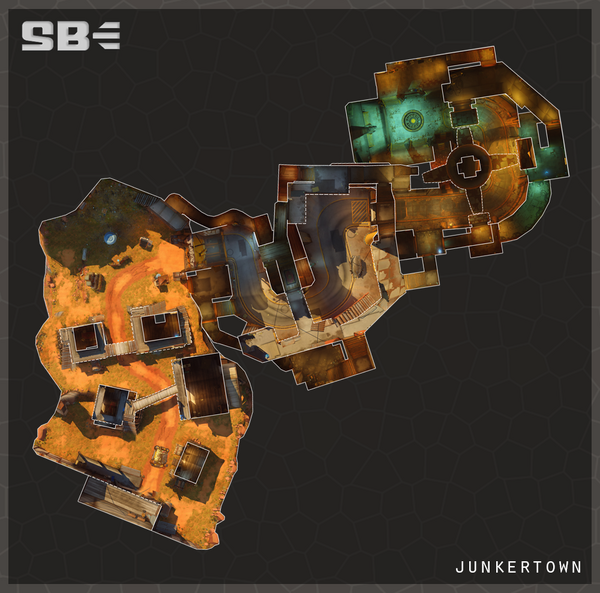 After the Omnic Crisis, the Australian government hoped to restore peace with the omnics by granting them a large area of land surrounding the Australian omnium. In doing so, many residents of the outback were displaced, and some of them, including Roadhog, formed a group of rebels they called the Australian Liberation Front. The ALF eventually managed to sabotage the omnium's fusion core, which blew up the omnium, irradiated the area, and scattered scrap metal across the outback.

Survivors would go on to build Junkertown in the ruins of the destroyed omnium. The town's residents, called Junkers, make a living by scavenging parts from the omnium's skeleton. In the center of town is a gladiatorial arena called the Scrapyard where the Queen of Junkertown oversees mech battles.one of them being Wrecking Ball

Among the scavengers was Junkrat, who found an incredibly valuable treasure in the omnium's ruins. He became the target of bounty hunters and hitmen throughout the city, so he hired Roadhog as his bodyguard. The two were eventually kicked out of Junkertown for the chaos they caused.

In Junkertown: The Plan, Junkrat and Roadhog returned with a mass of gold and cash amassed from their heists around the world. They had made a plan to hide explosives in the gold and use it to kill the Queen, but they were unable to get into the town.