The (Earth's) Moon
Horizon Lunar Colony is an Assault map location in Overwatch.

Built as a first step towards humanity's renewed exploration of space, the Horizon Lunar Colony’s goal was to examine the effects of prolonged extraterrestrial habitation—on human and ape alike. The scientists’ research proved incredibly promising...until, suddenly, all contact and communications with the base were lost.

The Horizon Lunar Colony was a space colony intended to serve as a launching point for humanity's next step in space exploration. In an effort to study the effects of long-term living in space, the station housed a number of genetically enhanced primates, such as gorillas and chimpanzees along with other animals. Winston and Hammond (Wrecking Ball) were apart of this group. The whole colony was funded and managed by Lucheng Interstellar.

The other apes banded together and rose up against the scientists, killing them and taking the facility for themselves. Included in the death toll was Winston's caretaker, Dr. Harold Winston. Winston didn't want to be involved with it and built himself a rocket, escaping the colony to land on Earth. Hammond also saw this as an opportunity and built an add-on to Winston’s escape pod. Hammond landed in Junkertown, while Winston landed in Watchpoint: Gibraltar

Long after the uprising, Lucheng Interstellar revealed that the monitoring systems are still active, and released some data recovered from before it went offline.

Patel 8:50PM
Can someone check the noise in the break room? It's past bedtime...
Nevsky 9:12PM
It was Simon and Hypatia causing trouble. I tell you, Simon has been an absolute handfull lately. I mean, more than usual. I'm confining him to his room and we can figure out what to do with him in the morning.

Winston 2:19PM
All hands report to Airlock E-35
Zhang 2:20PM
What happened? Are you ok...
Winston 2:22PM
I need help at Airlock E-35 immediately. Emergency malfunction with the airlock, need everyone to come at once, situation is critical. This is not a drill.

Giant telescope where players can interact with 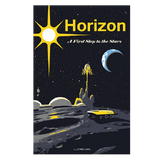 A map of the Horizon Lunar Colony from before the uprising
Deutsch Español 한국어 Polski Русский
Community content is available under CC-BY-SA unless otherwise noted.
Advertisement