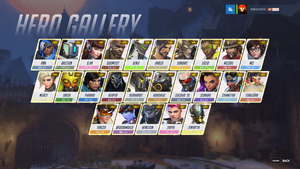 The Hero Gallery is a section accessed in the Main Menu where players can customize their heroes, view heroes' items, equip the items they unlocked from Loot Boxes, and spend Credits or Competitive Points to further unlock new items. Some pre-order bonuses, Origins Edition bonuses, achievements rewards, and seasonal events items (after the event ends) are shown in the gallery but cannot be unlocked with Credits or Competitive Points.

In the Hero Gallery, heroes are listed in the alphabet order. In each hero's section, players can access the items, categorized as below:

The price of items in the Hero Gallery is always fixed based on their rarity and quality: 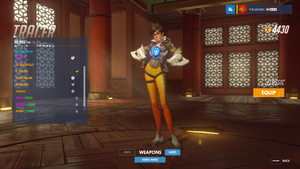 The Hero Gallery use a number of symbol to signify the origin, the occurrence, or the availability of an item.

Through a particular hero section, players are able to access hero info by clicking on the Hero Info button (or function+F1 in PC version, alternatively). The info section will display the hero's name, role, difficulty, and their tutorial videos for each ability. The tutorial videos are only able to be watched in the Hero Gallery, and cannot be accessed in in-match hero info.

Community content is available under CC-BY-SA unless otherwise noted.
Advertisement