"Hanamura is a well-preserved village of unassuming shops and quiet streets known mostly for its idyllic cherry blossom festival every spring. But to those who know its history, Hanamura is the ancestral home of the Shimada ninja clan, which had grown over the centuries to become a powerful criminal organization. As its neighboring cities expanded, Hanamura was encircled, and eventually, it was incorporated as a district within a larger city. For now, the imposing compound of the Shimada family lies empty, but that peace may soon be broken."
―Overwatch Visual Source Book

Hanamura is an Assault map location in Overwatch. 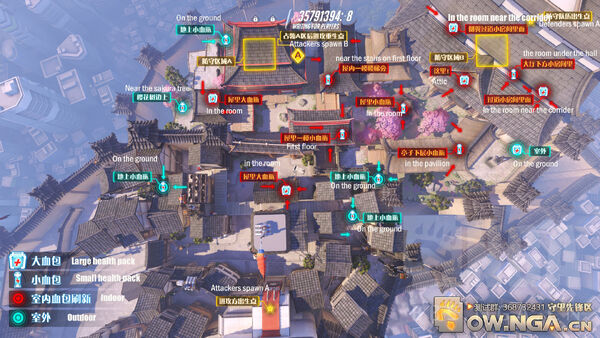 Hanamura was home to the Shimada Clan, and of Hanzo and Genji by extension. While Hanzo was trained in martial arts, archery, and sword fighting in the dojo, Genji had the freedom to enjoy the ramen shops and arcades of the modern districts surrounding the Shimada compound.

After Hanzo was named heir, he fought and nearly killed Genji. Though Genji was saved by Overwatch, Hanzo was unaware and left his sword in Hanamura out of shame. The Shimada Clan was later dismantled by Overwatch, and the town became the site of an annual cherry blossom festival. Hanzo returned to the dojo every year to honor Genji.

At some point, McCree visited Hanamura and stopped a robbery at the local Rikimaru.

In Dragons, Genji returned to Hanamura to meet Hanzo for the first time since he was nearly killed. Hanzo thought Genji was just another assassin, but after Genji came out on top of a fight, he revealed himself and forgave Hanzo for what he had done.