Eichenwalde is a Hybrid map location in Overwatch.

The forest has slowly begun overtaking the abandoned village of Eichenwalde, but the scars will never completely fade. During the Omnic Crisis, Eichenwalde was the site of a key battle, which is depicted in the Honor and Glory animated short. General Balderich von Adler took a handful of crusaders to the village, in an effort to outflank the omnic army. Balderich's soldiers were able to break down the enemy forces, giving the German military an opportunity to push back, but the Crusaders didn't make it out of the battle. General Balderich finally collapsed in the castle's great hall.

The payload on this map is a battering ram. The attacking team must escort it to Eichenwalde Castle to reclaim Balderich’s remains. 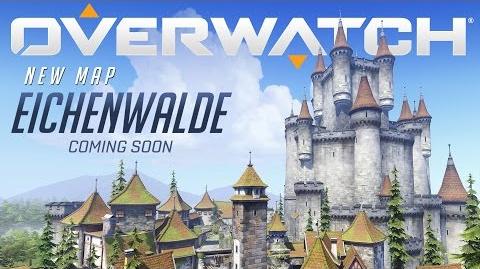 Eichenwalde Castle is a fortress, beside a village, on the outskirts of Stuttgart, Germany. It is the hometown of Balderich von Adler, leader of the Crusaders. During the Omnic Crisis, the castle was attacked by omnic infantry and defended by the German military and the Crusaders. Though most Crusaders died in the battle, save for Reinhardt Wilhelm, the German military was able to keep the omnics away from Stuttgart.

Today, the village and castle are abandoned, and the armor of Balderich von Adler still sits on the castle's throne. The village and nearby plains are littered with the remains of Bastion units. Only one unit had survived after 30 years. It had almost tried to attack Stuttgart, but was pacified by a bird it had befriended.