Dorado is an an Escort map location in Overwatch.

"It is Festival de la Luz in Dorado, an annual celebration of the end of the Omnic Crisis and the period of darkness - both figurative and literal - that engulfed Mexico when the Omnics destroyed much of the country's power grid and infrastructure. But there is a new dawn, as LumériCo and its CEO, war hero and former president Guillermo Portero, are unveiling a string of fusion plants that promise to deliver clean, free energy to the Mexican people."
―Overwatch Visual Source Book

The payload in this map is a truck with a fusion core in the back. The attacking team must escort it to the ziggurat to activate the power plant. 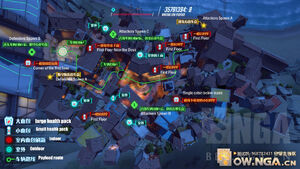 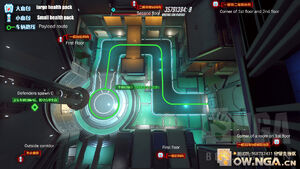 During the Omnic Crisis, Mexico's infrastructure was destroyed in what its people call 'La Medianoche', causing the nation to lose power and internet access for years. Today, the citizens of Dorado celebrate its end with the Festival de la Luz. LumériCo was founded by former president Guillermo Portero to repair the network, but a gang called Los Muertos has been fighting the company and accusing it of being corrupt.[4]

Later, Soldier: 76 traveled to Dorado and had a firefight with Los Muertos members. In the process, he saved Alejandra, a preteen girl whose family runs the Panadería las Nieblas by the cliffside.

LumériCo's latest power plant in Dorado was set to be finished on November 1, with a large party on Market Street to celebrate. However, Los Muertos managed to hack into LumériCo's database with help from a 'hacker collective' called Sombra. They leaked emails exposing the company's financial scandals and connections to Vishkar, sparking protests on the day of the celebration.[5] On the same day, Junkrat and Roadhog broke into the Banco de Dorado and stole millions of dollars worth of gold.

Two days later, Guillermo Portero stepped down from his position as CEO, and pro-Sombra graffiti has appeared across the world.[6]