Mobile Exo-Force of the Korean Army

D.Va is one of the heroes in Overwatch. She is a former professional gamer and a mech pilot who is participating in her country's special force to combat a colossal Omnic's devastating invasion.

D.Va’s mech is nimble and powerful—its twin Fusion Cannons blast away with autofire at short range, and she can use its Boosters to barrel over enemies and obstacles, or deflect attacks with her projectile-dismantling Defense Matrix or blast her enemies with her Micro Missiles.

D.Va is a former professional gamer who now uses her skills to pilot a state-of-the-art mech in defense of her homeland.

Twenty years ago, South Korea was attacked by a colossal omnic monstrosity that rose from the depths of the East China Sea. The massive, lumbering construct caused catastrophic damage to coastal cities before it was driven back beneath the waves. In response, the South Korean government developed a mechanized armored drone unit, called MEKA, to protect urban environments in future engagements with the omnic threat.

The government's fears proved to be well-founded, as a disturbing pattern of attacks emerged. Every few years, the monstrosity would rise from the sea to assault South Korea and its neighbors. The omnic learned from these encounters, often reconfiguring itself in a different form and appearing with new weapons and capabilities. Each incident ended in a stalemate, with the monstrosity defeated but not destroyed.

As the omnic continued to adapt, it eventually disrupted MEKA's drone-control networks, forcing the military to place pilots in the mechs. Scrambling to find suitable candidates, the government turned to the country's professional gamers, who possessed the necessary reflexes and instincts to operate the mechs' advanced weapons systems. Top stars were drafted, including reigning world champion Hana Song, also known as "D.Va." Famous for her elite skills, D.Va was a fierce competitor who played to win at all costs, and she had a well-earned reputation for showing no mercy to her opponents.

Seeing her new mission as a game, D.Va fearlessly charges into battle alongside the rest of her MEKA unit, ready to spring to her nation's defense at a moment's notice. Recently, she has begun to stream combat operations to her adoring fans, and her growing following has turned her into a global icon.

Boosters
Damaging movement type
10 damage
23.98 m range
11.99 m/s movement speed
Lasts 2 seconds or until cancelled
4-second cooldown
D.Va’s mech launches into the air, her momentum carrying her forward. She can turn and change directions or barrel through her enemies, knocking them back.
Default Key: (

Eject
Passive transformation type
Lasts 1 second
D.Va ejects out of her mech when it is destroyed.
Default Key: (Passive)

D.Va ejects from her mech and sets its reactor to explode, dealing massive damage to nearby opponents.

Light Gun
Linear projectile type
20 rounds per clip
1.5-second reload
14 damage
7 rounds per sec
50 m/s projectile speed
✔ Can headshot
While outside of her mech, D.Va can continue the fight with a mid-range automatic blaster.
Default Key: (

If her armored battle suit is destroyed, D.Va can call down a fresh mech and return to the fray.

For all of D.Va's skins and weapons, see D.Va/Skins and Weapons.

Note:
a This emote is the default and only emote D.Va is able to perform without her mech. The name is not official.
b This emote, after activating, will remain in its animation until the player inputs other actions to interrupt it.

One purchase of an alternate weapon skin will apply to the Fusion Cannons, Joysticks and Light Gun of all unlocked skins when equipping it.

Prevent 1500 damage with a single use of D.Va's Defense Matrix in quick or competitive play.
Reward: Pixel Spray

Kill 4 enemies with a single use of D.Va's Self-Destruct in quick or competitive play.
Reward: Cute Spray

Hana Song (Song Hana, 송하나), under the username "D.Va", represented South Korea in multiple international StarCraft tournaments. At the age of 16, she became the top StarCraft player in the world and went undefeated for the next three years of her life. At the age of 19, Hana was drafted into MEKA's army of mech pilots with the task of defending the coast around the East China Sea from a colossal adapting omnic, from the group/clan of onmics known as the Kuishin.

In at least one of those conflicts, D.Va's team nearly lost the fight with D.Va herself having to finish the fight solo after her squadmates were disabled and injured. While her squadmates were taking time off to recuperate, D.Va instead went to the garage to repair and try to improve MEKA. While there, an omnic attack was detected and D.Va had to fight them off 5 on 1 because reinforcements were unable to arrive quickly enough. While she was able to take out the first 4 easily enough, her mech sustained too much damage to beat the last one and she was forced to improvise. This lead to the idea of self-destructing her crippled mech above the waters of the South China Sea.

D.Va began to stream her combat operations online, and she gained fans around the world. Her fame led to her starring in the Goldshire Pictures movie Hero Of My Storm, as well as an advertisement for Nano Cola.

D.Va is a young slender woman wearing headgear that looks like headphones, a blue and white jumpsuit covered in logos, and white gloves and shoes. She has long brown hair and eyes, and some pink face-paint that kind of looks like whiskers.

D.Va is a very competent combatant despite her young age, not taking failure as an option and showing no mercy to her adversaries. This is in part because she knows that it isn't a game and losing in combat means people will die. She possesses an egotistical side, often smack-talking opponents during battle. Regardless of her fierce characteristics, D.Va takes pleasure in making her fanbase happy, as shown by cheerfully taking autograph requests from Reinhardt and Lúcio and being quick to thank her audience whenever she defeats an enemy.

Being a pro gamer, D.Va loves video games and enjoys making references to them. While on the battlefield, she will use many gaming terms, such as "nerf," "pocket healer," "GG," "AFK," and more. Despite the fact that she is mostly into games produced by Blizzard (for obvious reasons), she is familiar with old arcade ones as well. An example is her calling Winston "a giant gorilla from those old video games," which is a reference to the Donkey Kong arcade game. 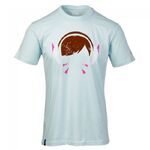 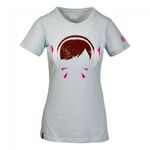 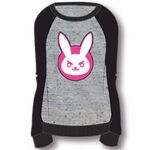 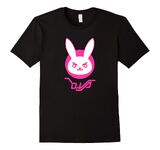 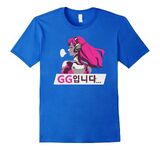 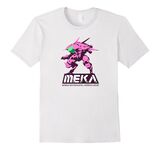