Irvine, California, USA
Blizzard World is is a Hybrid map location in Overwatch.

"Epic fun detected: Welcome to Blizzard World.See your favorite gaming memories come to life in Overwatch’s new hybrid map as you attack and defend the payload across Azeroth, Tristram, the Koprulu Sector, and beyond!themed around a theme-park designed around all of Blizzard's games."
―Blizzard[1]

The payload carries a glass case with a randomized item from one of Blizzard's franchises inside. Defenders on the map start in the Heroes of the Storm arcade, while attackers spawn in the Hearthstone tavern. First, the payload moves from the Warcraft-themed to the StarCraft-themed areas. Once secure, it then moves on to the Diablo-themed area, with the end point as the throne of the Skeleton King.

Heroes of the Storm Arcade

Symmetra and her turret trap 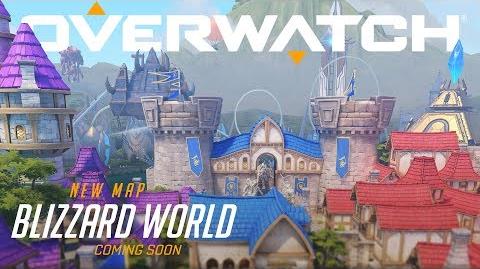